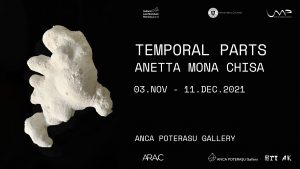 We dream in elaborated timelines and are shaped in structures we stretch from one beginning of a world to another one`s ending. Contorted forms give birth to altered functions: one thinks itself as a pair of legs and walks, one would wonder about and discover hands. “I know it has all been confusing,” Anne Boyer writes, “but it’s the same confusion as when I am confident that every person who has ever lived knows exactly what I mean when I describe feeling like a snake on the path in the dappled sunshine that turns out, on close inspection, only to be a snake’s discarded skin.”*

Anetta Mona Chisa follows the ambiguous terrain between identity and multiplicity, between discarded selves and alien otherness. The gallery show simultaneously becomes a hive mind, a cabinet of curiosities, a womb where zygotes are shaped from within the grip of matter and from within the mind of the artist and from nowhere in between.

Remnants and new bodies co-exist in an imagined landscape at the crossroads between the organic and the inorganic. Questioning how artistic and scientific knowledge is created, the artist walks the line between the two: chemical reactions create crystal like formations while other shapes are exhibited as castings that are either aggregated as almost fractal shapes, or otherwise returned to amorphous beginnings. Despite its breadth of inquiry, questions about sculpture and art itself re-emerge across, often surprisingly and usually affixed to the methods that Anetta Mona Chisa employs on metonyms of shapes and plays on visual perception.

”To see a snake is to think of the way the snake`s eyes glaze over and it might not be able to see for a bit because there it is, getting new skin, getting rid of the old, lost in the process of becoming something else.”**

The exhibition was developed within the ARAC ART & RESIDENCY residence. More information: www.aracartandresidency.com

Anetta Mona Chisa (1975) is an artist who lives and works in Prague. Between the years 1994 and 2000, she studied at the Academy of Fine Arts in Bratislava. In 2006, together with Lucia Tkáčová she was the Oskár Čepan Award laureate and in 2011 she exhibited at the 54th Venice Biennial in the acclaimed show Performing History (with Lucia Tkacova and Ion Grigorescu).

Throughout her artistic practice that usually takes place under the form of dialogues and collaborative working, Anetta Mona Chisa has dealt with the discontinuities and transformation of the Eastern-European socio-political context. The artist is less focused on the direct outcomes of the historical events, and more attuned to the idea of shifting systems of reference, of the necessity of change and adaptative reasoning to a world whose boundaries are more and more constrained to an idea of the market, of capitalist axioms and almost mystical digitalizations.

This project is financed with the support of EEA Grants 2014 – 2021 within the RO-CULTURE Program.

The EEA Grants represent the contribution of Iceland, Liechtenstein and Norway towards a green, competitive and inclusive Europe.There are two overall objectives: reduction of economic and social disparities in Europe, and to strengthen bilateral relations between the donor countries and 15 EU countries in Central and Southern Europe and the Baltics.

The three donor countries cooperate closely with the EU through the Agreement on the European Economic Area (EEA). The donors have provided €3.3 billion through consecutive grant schemes between 1994 and 2014. For the period 2014-2021, the EEA Grants amount to €1.55 billion. More info on: www.eeagrants.org and www.eeagrants.ro

RO-CULTURE is implemented in Romania by the Ministry of Culture through the Project Management Unit. The Programme aims at strengthening social and economic development through cultural cooperation, cultural entrepreneurship and cultural heritage management. The total budget amounts to 29 million EUR. More details are available on www.ro-cultura.ro